Teen SRC 2020 – To Kill a Mockingbird by Harper Lee

I originally discovered To Kill a Mockingbird by Harper Lee in my sister’s extensive book collection and I decided to finally read it after months of anticipation.

The novel introduces the Finches (Atticus, Jem, and Jean Louise). The Finches are as normal a family as you can find in Maycomb, Alabama. The story follows the Children (Jem and Jean Louise Finch, and sometimes Dill) as they learn about their father’s hopeless struggle to defend a black man accused of rape. The novel also contains a side plot where they learn about Boo Radley, Macyomb’s local mystery.

The novel flows excellently from chapter to chapter and page to page; readers are drawn in by Lee’s incredible storytelling. The novel does a great job of introducing readers and its own characters to racial bias and injustice. With the rise Black Lives Matter protests in the United States and around the world, the morals and message woven into the story are more than relevant. I would wholeheartedly recommend this novel to anyone who wishes to read about racial injustice and rate this an 8.5/10

Kiera Johnson leads a double life. Being one of the few Black girls at her school, she behaves the way she needs to: smart, helpful, and unproblematic. Even Kiera’s family and her boyfriend, Malcolm, expect her to act a certain way. The only time Kiera is truly herself is when she’s Emerald, the queen in a virtual reality game called Slay. Keira made Slay to celebrate Black excellence, and her multitude of players come from across the globe. Of course, no one in Kiera’s real life knows she made the game, or even that she plays it.

But when a Black boy is murdered for game money, for SLAY money, Kiera’s two very separate lives come crashing together. Kiera is filled with guilt for having created a game that took a boy’s life, but she doesn’t have time to grieve. Media outlets, and the internet has pounced on the game, on HER game, calling it racist and exclusionary. Everyone now has an opinion on SLAY, but Kiera doesn’t know what to do. Not saying anything, she might become complacent to the injustice, but speaking up could risk exposing her identity. Worst of all, Kiera now risks losing SLAY to Dred Scott, a racist troll. Emerald would fight for justice, Kiera knows. Emerald wouldn’t bow down to anyone. But will Kiera?

Slay is an absolute masterpiece. I have to admit to having an aversion to video-game related books, but Slay has dispelled that notion. The world-building in this book is amazing, the details exquisite, and I wished I could see a game like SLAY in real life. Kiera is a well-developed character, but some of the side characters are more likable, at least to me. We are also told how SLAY has impacted people’s lives by having a few chapters told in another perspective, a technique I will always love.

Slay by Brittney Morris gets 9/10. The ending was a bit too unrealistic for my taste, and there were some unnecessary scenes. (and i’m sorry, but the cover!! A portrait cover, *sigh*, and far too much pink, which doesn’t match with the story’s vibe.)

Overall, Slay opens up many important discussions about safe spaces for minorities, identity, and what Black excellence looks like at an individual level. That might sound preachy or way too serious, but I promise you, it’s not. The story itself is captivating and there is a mystery aspect to it as well (yayyy!!). Coming from a minority background myself, Slay feels like a hug after a tiring day, a hug that says “I see you and I feel you.” 100% recommend, whoever you are and whatever you like reading.

“What’s the point of having a voice if you’re gonna be silent in those moments you shouldn’t be?” – Angie Thomas, The Hate U Give

The Hate U Give by Angie Thomas is genuinely one of the most influential novels speaking out against racism written in our time. Especially now, in the times of people using their voice to campaign for what’s right, this book brings a whole new light to the controversial issues that have existed for generations.

Inspired by the Black Lives Matter movement, this novel is about a sixteen-year-old girl named Starr Carter who lives in two different worlds- a poor neighbourhood where she lives, and a fancy prep school she attends. Starr navigates through many feelings of grief after seeing her childhood best friend, Khalil, murdered by the police. When his death makes national headlines, Starr faces a choice that can change the entire community that surrounds her- does she defend her friend when confronted by a horrendous amount of outside pressures?

The Hate U Give by Angie Thomas features Starr Carter, an African American teenager who sees her childhood best friend, Khalil Harris, being shot and killed by a police officer after a routine traffic stop escalates into Khalil’s untimely demise. Starr is then forced to decide whether she will adhere to the unspoken laws of her local neighborhood and stay silent about the injustice she had witnessed, or testify in front of a grand jury and join an ongoing movement to end racist/xenophobic violence and police misconduct in communities across her area.

This book reflects serious topics like racism, rights and friendship. A lot of adult stuff. This book is written by 2 people with very different perspectives on life. They have reflected on their childhoods and how skin color doesn’t split people into groups. Just because you have a different skin color then someone else, doesn’t mean you can’t be friends. This book is great for middle school students and for anyone really. You don’t have to wear a specific type of shoes to “fit in”. Everyone is a person and should be treated like one no matter how different they look. This is a very deep story and great for middle school teaching.

This is such a heartfelt story because Mia [main character] changed everybody lives, and now its her chance to change her own life. Mia was struggling so hard and this book really represents real problems that poor immigrants all face. In so many movies, they make it look like if you immigrate to America you will suddenly be rich, have a penthouse, a pool, and so many other things, Wrong. This is a true story, it does not happen with a snap of your fingers. — Erin S

From World War II through NASA’s golden age, four African-American women confidently and courageously stepped into the National Advisory Committee for Aeronautics (now known as NASA). Their job? To provide the mathematical calculations that would help increase airplane production during wartime and eventually send the United States into space for the very first time.  Hidden Figures follows the stories of Dorothy Vaughan, Mary Jackson, Katherine Johnson, and Christine Darden, who participated in some of the United States’ greatest aeronautics successes.  These women lived through and persevered against the backdrop of some of the biggest movements ever to shape our nation’s history: the Civil Rights era, the Space Race, and the fight for gender equality.

Teen SRC 2018 – To Kill A Mockingbird By Harper Lee 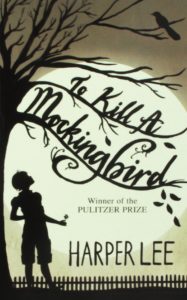 To Kill A Mockingbird By Harper Lee

In To Kill a Mockingbird, author Harper Lee uses memorable characters to explore civil rights and racism in the segregated Southern United States of the 1930s. Told through the eyes of Scout Finch, you learn about her father Atticus Finch, an attorney who hopelessly strives to prove the innocence of a black man unjustly accused of rape; and about Boo Radley, a mysterious neighbor who saves Scout and her brother Jem from being killed.

I enjoyed this book very much. The characters within the story are amazing. Harper Lee did an excellent job of capturing the reading with every page. It is a wonderful book about growing up and racial challenges. The morals in the story are relevant today and are very important. I would definitely recommend this book to others and would happily read it again.

The Hate U Give by Angie Thomas

This book is a MUST-READ for anyone. I recommended it to my friend, and she said that she bought a copy from Indigo. The last time I saw her book, it was all worn out. I really loved Starr, the protagonist of the novel, because she seemed so resilient, authentic, and everything I want to be. I can (almost) assure you that you’ll end up falling head over heels for this magnificent binder of pages in which we call a book. Angie Thomas writes in such a powerful voice- a voice that will be heard and listened to through Canada to the US, from Japan to Africa.

I really recommend this book to everyone who wants to make a difference in the world. I know I haven’t told you much about the book, but I really don’t know how without spoiling it!