Teen SRC 2020 – A Wrinkle in Time by Madeleine L’Engle

A Wrinkle in Time by Madeleine L’Engle is an adventure/fantasy genre of book that tells the story of a middle-school aged girl named Margaret (Meg for short). Meg is a pretty average kid, but what isn’t average about her is her peculiar family…

Meg’s mother, Dr. Kate Murry, is a beautiful woman and a really smart scientist, but she’s also an amazing mom. Meg is the eldest of four children, the others being Sandy and Dennys (twins), and Charles Wallace, whose knowledge and wisdom are far beyond his years. He has an uncanny ability of being able to read Meg and her mother’s minds, and even predicting their near future (to some extent). Meg’s father (Dr. Alex Murry) is also a scientist, but he has been missing for almost an entire year. It’s almost as if he disappeared into thin air…

The Lost Hero by Rick Riordin

This is the first book that I read from Rick Riordan, and you can understand most of it without reading the previous series in the timeline, Percy Jackson and the Olympians. This book has a writing style that lets you change perspectives every two chapters. It has an interesting storyline, and it’s worth reading.

This book reflects serious topics like racism, rights and friendship. A lot of adult stuff. This book is written by 2 people with very different perspectives on life. They have reflected on their childhoods and how skin color doesn’t split people into groups. Just because you have a different skin color then someone else, doesn’t mean you can’t be friends. This book is great for middle school students and for anyone really. You don’t have to wear a specific type of shoes to “fit in”. Everyone is a person and should be treated like one no matter how different they look. This is a very deep story and great for middle school teaching.

This is such a heartfelt story because Mia [main character] changed everybody lives, and now its her chance to change her own life. Mia was struggling so hard and this book really represents real problems that poor immigrants all face. In so many movies, they make it look like if you immigrate to America you will suddenly be rich, have a penthouse, a pool, and so many other things, Wrong. This is a true story, it does not happen with a snap of your fingers. — Erin S

Roz is a robot. She doesn’t know where she is or even who she is, all she know is that she helps you. Roz is a robot unlike others because she learns. So when she finds herself on a remote island she learns how to survive by watching other animals. Meanwhile theres a buzz around the island with the animals that theres a monster. All the animals are scared of Roz. When Roz adopts a gosling the animals learn to realize that Roz isn’t a monster. As the gosling Brightbill always new that Roz was her mom. When winter comes Brightbill flies south with the flock. Roz is worried, Brightbill has never been away from her. All the other animals help Roz prepare for winter. Will they survive?

I thought the Wild Robot was kind of boring at the beginning but then got better. It was very creative and something would always go wrong, but then the animals would find a way to solve the problem in a unique way. I want to know what happens next in the next book the Wild Robot Escapes.

Pugs and kisses is a book about a girl named Ana Ramos, and she lives in New York. She may not have a dog, because her parents are really strict and they don’t like dogs or cats, but she does help one of walk her neighbor’s pug, Osito. One day, Ana was walking in the park and she ran into a guy named Calvin, who also owns a dog, named Pancake. Osito and Pancake became best friends. They talked for a little bit and Ana started to catch feelings for Calvin. But! She forgot to tell Calvin that that wasn’t her dog. Ana thought that she would never see him again, but she was wrong, Calvin just moved to New York and he went to her school. Ana thought that this would be the right time to tell him, but she can’t admit that Osito isn’t her’s. Will Ana mess up and figure out how she feels for Calvin before her lies catch up to her?

I really enjoyed reading this book, every time I finish a chapter, I want to continue reading it. I highly recommend this book!

Pax is book that has two different perspectives, the chapters alternate between the perspective of a boy named Peter and his fox named Pax. Peter’s dad get enlisted into the army. He forces the inseparable pair to break. Peter is forced to leave Pax in a forest. Peter is at his grandpa’s house while his dad is at war, but then sneaks out to find Pax. Meanwhile Pax is confused of why his owner didn’t come back for him. Peter explores the forest looking for Pax, but then breaks his leg. He finds this private property, he settles there. A lady named Viola tries to kick him out but realizes his leg is broken and helps him. Together they build Peter’s strength back. Pax meets a small pack of wolves, they teach Pax how to survive in the wild. Will Peter and Pax ever be reunited?

I loved this book, it was in a great style of writing and I thought that it was very exiting. I liked that you would never know what was coming next and you always thought something but it went the other way. I think you should definitely read it.

This isn’t a story book but a book of everyday of the year with a quote for each day. It is about different precepts that diverse people wrote and put into a book about friendship, kindness, courage and love. The quotes are from books, movie/book characters, famous people etc. Here is a few spoils of some of the quotes: “The best things in life are not things.”-Ginny Moore “Practice random kindness and senseless acts of beauty.” -Anne Herbert

I personally like the book even there isn’t any story to it. There is a lot of inspirational words and quotes in the book that can actually help with real life. It really is amazing how the author found so many great precepts. This is a wonderful book for Wonder fans and people who need some inspiration and comfort. I would rate this book 5 stars. Hope this review is helpful! 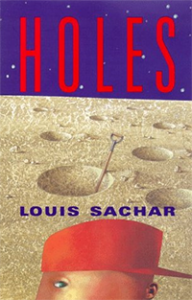 This is a very interesting book and has a lot of action.  It was very boring at first, but then it became more interesting.  At first I only read it because my friends said it was a great book. 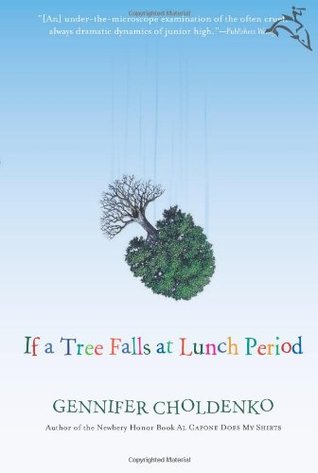 If a Tree Falls at Lunch Period by Gennifer Choldenko

The book is about racism, but it is expressed in a more kid friendly way.  Kristen’s world is crumbling because he parents are constantly arguing.  At school, a new child Walker Jones who is African American arrives and helps becomes her friend.  Kristen eventually finds something shocking about Walker that surprises them both.

The book is short, but is very interesting.  As I read through the book, I could understand how the characters felt and could imagine being in their world.  The book shows the day to day problems in the world that we always overlook.