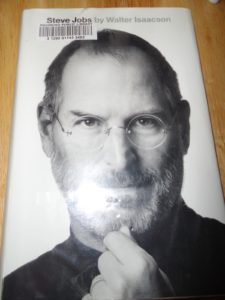 Some of you might be able to recognize this person instantly. (Either that, or you’ve read the title). He is Steve Jobs, inventor and creator. His path is not like those of other company founders, but, personally, I think Steve Jobs has the most inspirational story of all time.

Adopted at birth, Jobs ended up being fascinated with electronics like his adoptive father. After his schooling years, he and another Steve also interested in electronics, invented the Apple I, signalling the birth of Apple.

This book shows that, even if you don’t have a very famous background, you still can achieve something great in life, something that will be used by others for years to come.