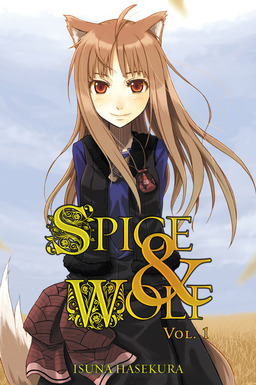 Spice and Wolf is a novel (yes, novel not manga) about a travelling merchant named Kraft Lawrence who wanders the land, buying and selling goods until a girl with ears and a tail named Holo claiming to be the goddess of harvest appears in his merchant cart. She and Lawrence strike a deal. She helps Lawrence’s business and in return, Lawrence will bring Holo to her homeland.

When you look at this cover, the first thing you might think is “Manga? No thanks. I only read high-end stuff like Twilight and Fifty Shades of Gray.” But don’t you think that’s a bit closed minded? You skip out on hundreds of thousands of books because they’re labelled anime or manga? You might miss your favourite series just because of your pride in your book selection. And this isn’t even a manga. It’s full of words and the occasional pretty illustration. But the book could have all the words in the world and still be a terrible book. So how does this book stack up against the rest?

You know how in courtroom dramas there’s always that moment when the attorney solves the case and crushes their opposition with that knowledge? That’s always the best part of the show, and Spice and Wolf has moments like that when Holo and Lawrence are trading and trying to milk someone for their every cent and it keeps you turning those pages fast, yet ever so carefully. Speaking of money, Spice and Wolf makes speculation and other currency shenanigans bearable. I think it even taught me a bit about currency exchange and all that (Try giving this book to a teacher and see what they think)! And when a book can make something duller than a butter knife interesting, that’s when you know it has good writing. Speaking of good writing…

Lawrence and Holo are great characters. Lawrence is a 25 year old who has been on the road for all his life and just wants a real friend. But if he can’t have a friend, he’ll settle for money. Holo is a flirty, confident half-wolf half-human who is smarter than she lets on. Put them in a cart for 250 pages and they work so well together. Holo’s overconfidence clashing with Lawrence’s actual merchant smarts, Lawrence constantly underestimating Holo’s cleverness, the way they both talk about loneliness together, the banter in general is pretty genius. As you watch the two, stuck in a merchant’s cart with each other, you get to feel they both care a lot about one another and would kind of be lost without the other.

Overall, Spice and Wolf is a great book full of exciting, page turning moments mixed with characters that you cheer for as loud as you can and I would wholeheartedly recommend it. But we shouldn’t forget that Spice and Wolf is a series. It is an ongoing series so that means a few plot threads introduced in the first book are left dangling. Despite that, I still think the first volume of Spice and Wolf can stand very well on its own. And so with that, my final rating for this book is a cup of coffee/10: a bit odd at first, but something that gets you excited about and addicted to the more you try it.