Dungeons and Dragons at the Library – Tavyn Highlander!

One of the players in our D&D group, Vana, has created a Tiefling magic user. (Art by Vana.) This is his backstory…

Adopted into an Elven noble family at the age of four, Tavyn Highlander came from old money. He was strange looking for a Tiefling, as he carried a very reptilian appearance. He showed a talent for evocation magic, as well as a love for trickery. He was raised with Lord’s training along with his older sister, Levanne, the blood daughter of his adoptive parents. By his early teens he was fluent in Common, Undercommon, Infernal, and Draconic, despite his parent’s distaste for the ‘lesser’ languages. 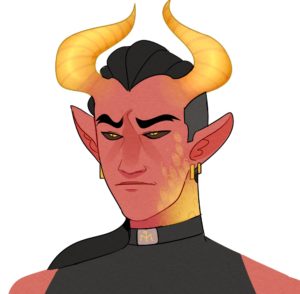 As he reached his late teens, he began to dream of a world outside his family’s house, escaping out of his window at night to explore the criminal underbelly of his home town.  He revealed to his sister Levanne that he had been leaving the house in the night, and she told of his escapades to their parents. Tavyn’s parents flew into a rage, and as punishment arranged his marriage to a fellow noble. That night, Tavyn escaped his house with a hefty amount of gold and left town, turning to the criminal underground to hide. 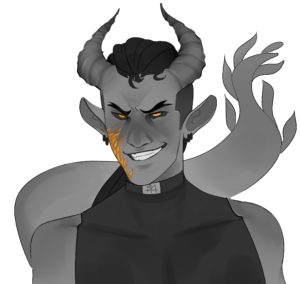 He now travels to escape his adoptive parents, discover the identity of his birth family, and find out who he really is.

Interested in playing D&D? Let us know! We have two spots open in our teen game that meets Tuesdays from 7-9pm.