Stranger Things are Happening at Your Library!

If you’re a fan of Stranger Things, you have seen them play and talk about the game Dungeons and Dragons (also known as D&D). By the time the kids in the TV series started playing it, since the show takes place in the 80s, Dungeons and Dragons would have already been around for more than a decade. 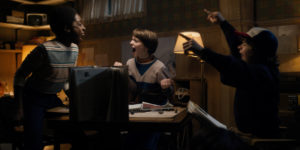 Whether you realize it or not, your gaming and literary world was heavily inspired by D&D. World of Warcraft, Diablo, Skyrim, and many other video games are descendants of the game you see the characters playing in Stranger Things. The difference is that the action in D&D takes place in your imagination and not on a computer screen.

How does that work? Think of it like reading a book. The author, known as the “Dungeon Master,” or “DM,” tells you the story by describing what you see, except with D&D you get to play the character and choose where the plot goes. Kind of like this:

DM: You walk into a cave. It’s dark, but you smell the putrid stench of someone who has not showered in weeks.
Player: I light a torch!
DM: The room ignites in a soft amber glow, and hiding in the shadows you see a goblin with a treasure chest in his hand.

And so the story continues, with you as the hero!

Starting in January, Richmond Public Library will be putting together a Dungeons and Dragons game  just for teens! Dungeon Mastered by James, Digital Services Tech (and author), we’ll be using much of our in-house tech to enhance the game. 3D printed figures, maps displayed on our media wall with six screens, characters generated on iPads, and much more!

Watch this blog for more information and our website for registration in this program! (Registration opens December 18th!)