Hi, and welcome to my profile! I am currently volunteering at the Richmond Public Library at various events. I am also a member of the Teen Ambassadors, an organization that helps with program planning accords the community and helping youth in general. I am currently involved with the Junior Science Team, Art Club, and Math Club. My interests include practicing Piano and Flute, reading any kind of literature, and writing on occasions. My favourite subjects include English, Math, Social Studies, Band, and Science.

The Strange Case of Dr. Jekyll & Mr. Hyde by Robert Louis Stevenson is a captivating narrative regarding the moral ambiguities of science and the duplicity of human nature. Dr Jekyll is a benevolent, well-respected and brilliant scientist who meddles with the malevolent aspects of science, as he aims to discover and breed his depraved alter ego. He does this through transforming himself into Mr Hyde, a monstrous being who is unable to repent or accept responsibility for any of his heinous actions.

The Invisible Man by H.G. Wells demonstrates the power to transform the human body using advances in scientific achievement. The novel itself is an enthralling and entertaining tale of terror and suspense, and it is a significant Faustian allegory of the dangerous capabilities of unregulated and unbridled scientific endeavours many decide to embark on. The Invisible Man is able to endure as one of the most notable stories in science fiction, in which Griffin, a brilliant and progidouous scientist uncovers the secret to achieving invisibility, but his grandiose ambitions and the power he unleashes causes him to spiral into intrigue, madness, and murder.

The Hate U Give by Angie Thomas features Starr Carter, an African American teenager who sees her childhood best friend, Khalil Harris, being shot and killed by a police officer after a routine traffic stop escalates into Khalil’s untimely demise. Starr is then forced to decide whether she will adhere to the unspoken laws of her local neighborhood and stay silent about the injustice she had witnessed, or testify in front of a grand jury and join an ongoing movement to end racist/xenophobic violence and police misconduct in communities across her area.

1984 by George Orwell illustrates a dystopian society and political prophecy in which Big Brother is always listening in, and high-tech devices eavesdrop in people’s homes.  1984 takes place in a world of endless war, where fear and hate are used as weapons against foreigners. It is a world that has the government insisting that reality is not “something objective, external, existing in its own right” — but rather, “whatever the Party holds to be truth is truth.”

The War of the Worlds by H.G. Wells is an innovative and imaginative book written at the end of the nineteenth century, in which humanity is left scarred by a devastating attack from the Martians. Wells uses diverse language and intriguing metaphors to engage with his audience not only with the themes of his books, but to the world as a whole. In his popular novel, War of the Worlds, Wells uses an extraterrestrial invasion to exhibit and provoke the concepts of life, free will, fate and dominant forces that we cannot control.

The Book Thief by Markus Zusak is about a young girl known as Liesel Meminger who grows up in Germany amidst World War II who lives with her new foster parents, Hans and Rosa Hubermann. Throughout the story, Liesel steals various pieces of literature, even though she is oblivious to what the words and paragraphs within them mean and how to read them. At first, she doesn’t even know how to comprehend the words and letters within the books, but she knows that the books themselves hold significant values and ideas. Hans notices and teaches her how to make sense of the letters, in which Liesel slowly progresses in her journey to become a more literate person. Eventually, Liesel realizes that Hans and Rosa are secretly in defiance with the Nazi regime by hiding a Jewish boy known as Max in their basement.

Stargirl by Jerry Spinelli is a renowned and critically acclaimed young adult novel which was published in August 2000. Like many of Spinelli’s other young adult novels, Stargirl deals with issues of conformity versus individuality, leaving the novel to resonate with various demographics from young adults to adult educators alike.

Leo Borlock is an eleventh grader who would like nothing more than to conform within his stereotypical high school environment. However, Leo and the rest of Mica high school become torn away from their conventional existence by the arrival of Stargirl Caraway, a defiant and eccentric student who has been homeschooled her entire life and is now attending high school for the first time.  In the first half of the school year, Leo observes Stargirl’s abnormal actions and how his classmates react to her strange lifestyle.  At first, the students are suspicious of Stargirl’s eccentric nature and are hesitant to socialize with her. As the story progresses, some of the students are influenced by Stargirl’s individuality and become more open-minded themselves.

That was Then, This is Now by S.E Hinton

In the 1960’s, a small town in Oklahoma has had a lot of turmoil, with gang wars and teenage drama coated all over the streets. In the midst of all this chaos, Mark Douglas and Bryon Douglas, two close siblings, are starting to drift apart from each other. As Bryon matures, Mark becomes more hateful and violent, with Bryon trying to keep their relationship intact before it shatters away forever. Meanwhile, Bryon starts to develop a more complex understanding of the world, and where he fits among the beautiful hellfire of adolescent life.

The style in which “That Was Then, This is Now” was written gives a rather eloquent yet intriguing air of poise to this novel, using sophisticated language to transform the plight of the character’s conflicts and experiences into inquisitive expression through language. Even though the point of view in the novel belongs to Bryon Douglas, Mark’s older stepbrother, it brings a level of complexity and thoughtfulness that gives the story a heartfelt tone into this novel’s world. 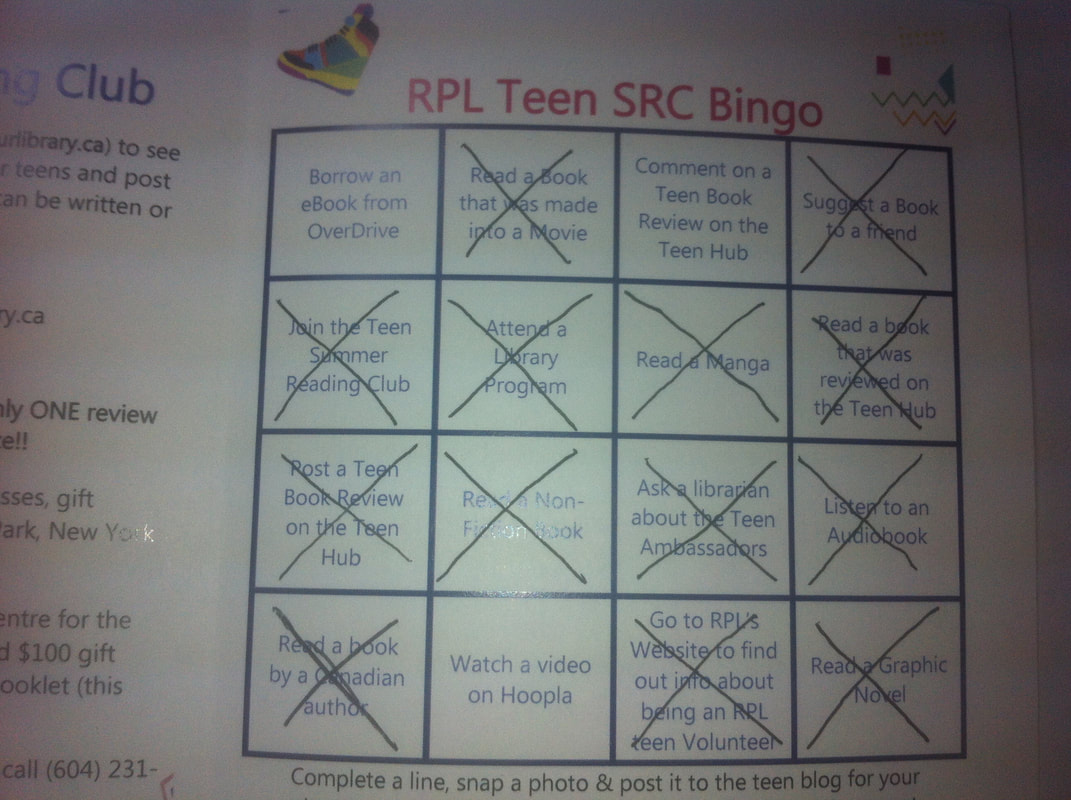 My  Teen SRC Bingo Submission, with 4 lines completed in the booklet.

End of Days by Eric Walters

In a reality similar to ours, all of the world’s most brightest scientists and mathematicians have disappeared from society, working in secret as the International Aerospace Research Institute to stop a deadly threat unlike anything humanity has ever faced: an asteroid threatening to obliterate all life on earth, racing towards earth. The head scientist, Professor Daniel Sheppard, has been working effortlessly to stop the asteroid from hitting, but feels the pressure of the fate of  7 billion lives in the balance, all relying on him to save humanity. But little does he know that his closest colleagues could turn traitors. As the doomsday clock ticks down, Sheppard is running out of options, while presumed dead billionaire Joshua Fitchett has already taken matters into his own hands, recruiting 16 year old Billy to his cause to lead mankind to safety, and to complete his destiny.

This book changed my view of apocalyptic scenarios, elaborating on all sides of the picture, how not only the main characters manage to cope, but how fragile society really is, how it can crumble into ashes when people realize that their lives now have a deadline to them. This book causes me to ponder about things I never really realized about this genre of book, like how the world would keep going if it  knew that their lives would be ended shortly, and if they knew exactly when they would perish. It also shows how, if faced with a common threat, even if it is the end of the world, countries who have had unstable relationships, no matter who they were, they came together to stop a terrible fate, working side by side. How it took an asteroid to bring a planet together really touched on how, when there are the right circumstances, people can put aside their differences and accomplish incredible, world changing things. I give this book 5 out of 5 stars, and recommend it to anyone who wants a break from stereotypical Judgement Day stories and want a fresh face of science fiction.